Reports
The needs of the people living near the occupation line (Pakhulani, Tkaia, Lia, Rike, Khurcha, Orsantia)
In early July, the team members of the Democracy Research Institute visited the villages of Zugdidi and Tsalenjikha municipalities in the Samegrelo-Zemo Svaneti region, which border the occupied territory of Abkhazia.
The Pakhulani community
The Pakhulani community, which includes four villages (Pakhulani, Kalaghali, Tskoushi, Chvele), is located in the Tsalenjikha municipality, on the right bank of the Enguri River. The community can only be accessed through a Georgian police post, where law enforcement officers check the documents of passengers, specify the purpose of their visit and keep copies of their identification documents.
The caution of law enforcement officers has a reason. In May, the Russian military began renewing the barbed wire between Pakhulani and Saberio - replacing old, damaged poles with new ones and installing new barbed wire. Surveillance cameras installed near the dividing line are easily visible to the naked eye.
According to the 2002 census [1], 3,828 people lived in the Pakhulani community, while according to the 2014 census - the number of local population decreased to 1,320. [2] According to the locals, there are currently about 700 households in all the four villages.
The so-called Saberio-Pakhulani checkpoint is located at the end of the settlement. Before the imposition of the pandemic-related restrictions, hundreds of people had been able to access the rest of Georgia on a daily basis through this checkpoint, which is currently closed.
The socio-economic situation of the population of the Pakhulani community is worrisome. Most of the agricultural lands were lost as a result of the so-called "borderization". Currently, the main source of income for the locals is nuts, which are being destroyed by Asian bugs. The locals complain about the fact that they have to buy chemicals at their own expense and that the help of local authorities is not enough. The cattle also often go missing. We were told that if the cattle cross the dividing line, locals have to pay a “ransom” to get them back.
The community does not have a gas supply network, due to which, the population has to use firewood in winter. Drinking and irrigation water is a constant problem of Pakhulani. There are 5-6 shops in the settlement, but there is no pharmacy. Locals are waiting for the opening of a new outpatient clinic every day, which has already been built, but remains closed.
The population of Pakhulani is especially concerned about the fact that the cemetery of the village is now on the other side of the so-called border. It can be easily seen from the vicinity of the "border" that the cemetery is secured "from visitors" with an iron chain lock.
When we asked the locals what they demanded from the local or central government, they said they would like us to mediate an installment of a speed bump (sleeping policeman) near the village school. 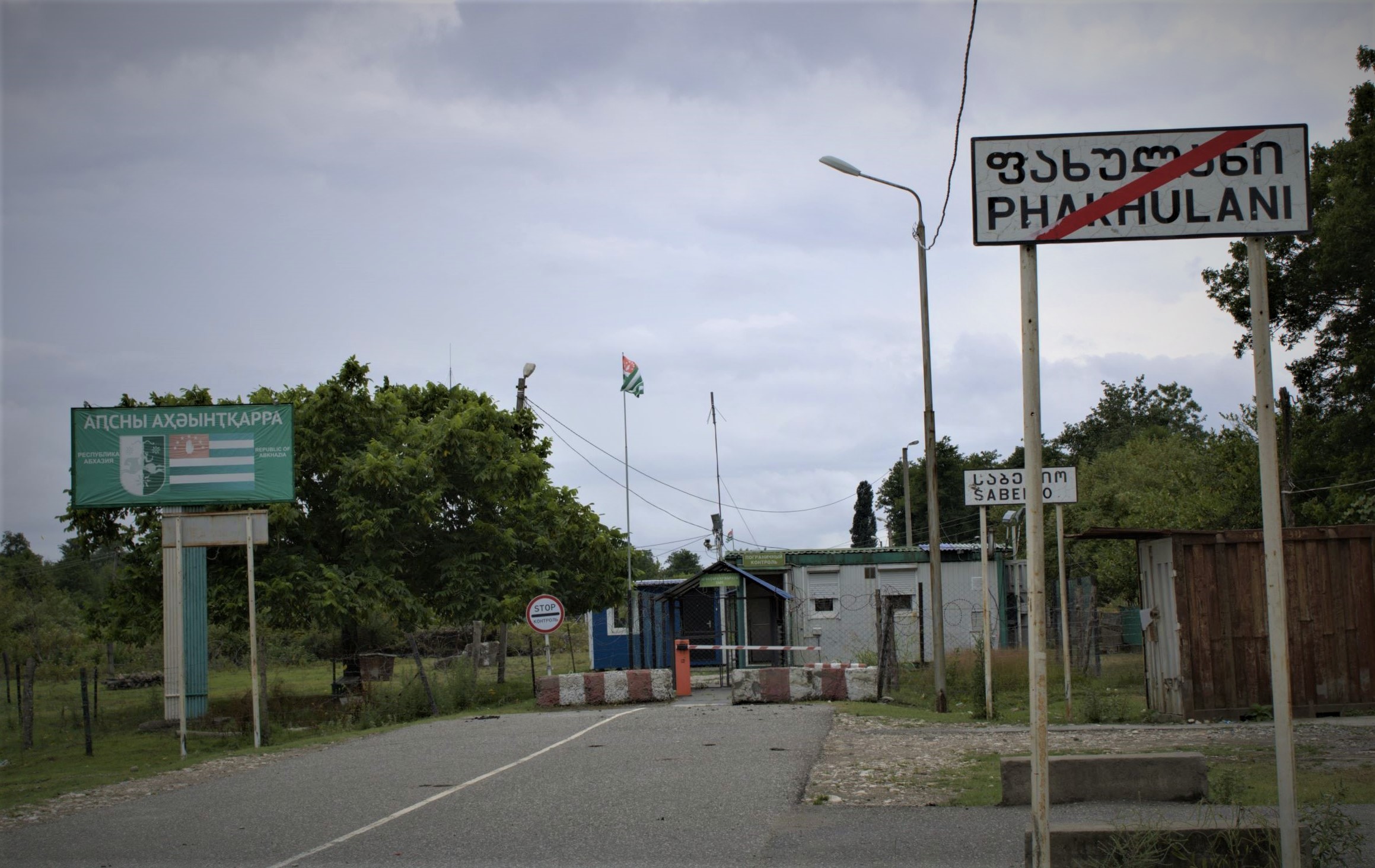 The feeling of hopelessness was further exacerbated after municipal transport was halted due to the coronavirus pandemic. "The bus driver used to take a shopping list of at least ten people to Zugdidi, and we have been left without essentials after the bus was halted," one of the locals told us, adding that Khurcha is a bus cemetery, as only the oldest and malfunctioning vehicles are allocated to them.
The village is Orsantia
The village of Orsantia is located in the Zugdidi municipality, on the left bank of the Enguri River. The village borders the occupied territory of Abkhazia. According to the 2002 census, 4,499 people lived in Orsantia, while according to the 2014 data – 2,052 people live in the village. According to locals, there are currently about 700 households in the village.
It is possible to move in the village freely. The so-called Orsantia-Otobaia checkpoint had been functioning in the village before 2017. The people of Orsantia and Otobaia have close kinship and suffer from the closure of the checkpoint. The above has become a reason for the increasing number of cases of illegal crossing of the so-called border.

A community center of the LEPL Public Service Development Agency of the Ministry of Justice is functioning in the village. Locals name unemployment as the biggest problem.
[1] Main results of the first national census of Georgia 2002, Volume II, available at http://census.ge/ge/2002-results
[2] Population census 2014, National Statistics Office of Georgia (November 2014) https://www.geostat.ge/index.php/ka
MONITORING OF ASSEMBLIES AND DEMONSTRATIONS OF FAR-RIGHT EXTREMIST GROUPS
Populism and far-right movements are not new to Georgia. However, far-right extremist groups have been active in the country since 2012.
THE IDEOLOGY OF FAR-RIGHT GROUPS IN GEORGIA
The present analysis is based on the stories of twelve far-right activists. When talking about their activism and ideology, respondents use scientiﬁc terms and examples from different countries.
The needs of people living along the occupation line (Tvaurebi, Odzisi)

In early June, we visited the villages of Tvaurebi and Odzisi located near the occupation line.