Our Position
Monitoring Covid-19 in Abkhazia and South Ossetia - Ucha Nanuashvili
A former Ombudsman of Georgia, Ucha Nanuashvili founded a public policy think tank with a special focus on human rights in the occupied regions, as well as political and judicial reform in Georgia, with the aim to consolidate democracy, accountability and good governance.

Ucha Nanuashvili has a long track record of working in civil society in Georgia. He served as an Ombudsman of Georgia from 2012 to 2017, founded the Georgian Human Rights Center, and coordinated the South Caucasus Network of Human Rights House Tbilisi. He was also part of the steering committee of Eastern Partnership Civil Society Forum.

His latest civil society project is Democracy Research Institute (DRI), a public policy think tank which focuses on the promotion of human rights and fundamental freedoms and on the establishment of an accountable governance system in Georgia, and has a particular focus on the breakaway regions of Abkhazia and South Ossetia, which are under Russian control and where access is heavily restricted.

Since its establishment in 2018, DRI has carried out a number of projects on human rights, anti-radicalisation and reform. With EED’s support, Nanuashvili and his team are monitoring the human rights situation in Abkhazia and South Ossetia, using a network of contacts in the regions that allows them to fill the informational vacuum relative to the two occupied territories.
Covid-19 and the occupied territories

Entering Abkhazia and South Ossetia is difficult in normal circumstances, but in March the two breakaway regions sealed their borders with Georgia to prevent the spread of Covid-19. This came after a turbulent period in 2019 when the frontiers were closed for months, first after protests erupted in Tbilisi last summer and then following disagreements between Tbilisi and the South Ossetian authorities over a checkpoint in the village of Chorchana that triggered the biggest crisis since 2008.

The two regions are effectively cut off from Georgia and the rest of the international community, which puts them at risk of a health crisis with the Covid-19 pandemic. “The Akhalgori checkpoint has been closed since September, and the area is isolated not only from Georgia, but also from South Ossetia” relates Nanuashvili. “There is no real healthcare system in Akhalgori, and this double isolation could cause a humanitarian crisis. We want the Georgian government to provide some support.”

Tbilisi has opened a new hospital one kilometre away from the Enguri Bridge, the checkpoint between Georgia and Abkhazia, to offer medical care on both sides of the occupation line. But no analogous project is foreseen for South Ossetia, the smaller and less developed of the two territories.

The village of Ergneti, like Akhalgori, is also facing isolation-related issues; DRI reports that with no pharmacy in Ergneti, residents are unable to buy medicines during the state of emergency; even buying bread is an arduous task.

As of June 9, there are currently 57 confirmed cases of Covid-19 in South Ossetia, and, according to a DRI report, the population is not following social distancing rules. The de facto government is refusing WHO assistance.

During the pandemic, the information that DRI receives from their partners in the occupied territories is focused on the lack of adequate medical care. But there are of course other challenges for the residents of Abkhazia and South Ossetia, particularly for the few Georgians who remained there after the wars of the 1990s. 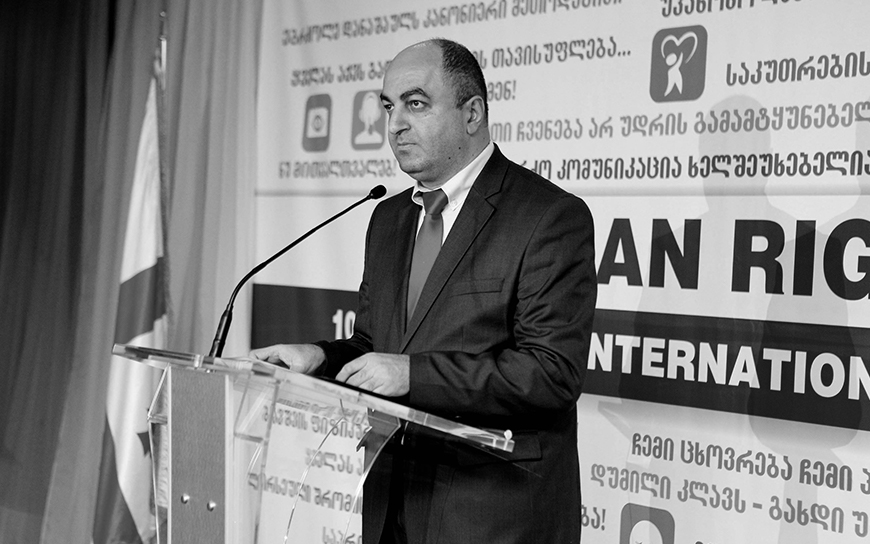 Freedom of movement is the main challenge. Arbitrary border closures by the de facto authorities harm the local economy, which often relies on exchanges with the closest government-controlled area. Many residents of Abkhazia or South Ossetia regularly crossed the border for medical care even before the pandemic. Last December, the arrest by South Ossetian authorities of Georgian doctor Vazha Gaprindashvili for allegedly crossing the border illegally to assist a patient in the occupied territory caused outrage across Georgia.

The de facto authorities also often move the border further into Tbilisi-controlled territory, a process called ‘borderisation’ which, coupled with increased militarisation in the occupied regions, also affects the human rights and daily life of the local population, explains Nanuashvili.
Georgians in the occupied territories are also denied an education in their native language, as the educational system is in Russian and its quality is poor.

At present, DRI is the only NGO working in the occupied territories with such a wide network of local contacts. They consider it their duty to inform Georgian society and government, as well as the European Union and other international organizations, about daily life in Abkhazia and South Ossetia, through roundtables and other events focused on disseminating information.

DRI’s activities are not limited to monitoring the occupied territories. Their interests range from monitoring far-right radicalisation to making policy recommendations for reform to the government.

When it comes to anti-radicalisation, Nanuashvili explains: “We try to monitor events organised by far-right groups and their activities on social media. We closely follow the groups and their leaders as well”. The rise of far-right extremist in Georgia follows a worldwide trend that was particularly visible last year, when attempts to host the country’s first ever LGBT pride event was met with protests and violent threats from ultra-conservative groups. During the Covid-19 emergency, DRI has also monitored how far-right groups have used the pandemic to spread misinformation and anti-Western conspiracy theories on social media.

DRI is also involved in studying best practices in the security sectors of various European countries to make recommendations for reform to the government. According to Nanuashvili, the security service is too politicised and it is not separated enough from the prosecutor’s office; he believes an independent body should be created to deal with corruption cases, as well as an independent security service with public and parliamentary oversight.

Another of DRI’s fields of expertise is the juvenile legal system. They provide free legal aid and psychological assistance to juveniles and their family members, as well as training for legal professionals and lawyers. 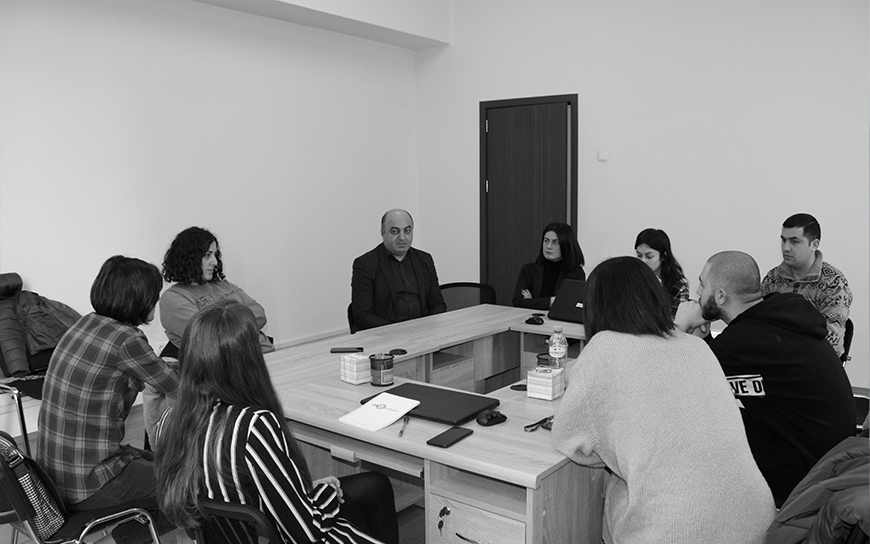 Georgia in the time of lockdown

When lockdown started in March, Nanuashvili moved much of his work remotely. Trainings were postponed, legal consultations moved online and DRI’s research and reporting work continued. They also launched a new project aimed at disseminating information on Covid-19 in different languages aimed at ethnic minorities in Georgia. DRI members acted as a watchdog for the government during the crisis, often appearing on television to discuss the state of emergency and human rights during the emergency situation.

DRI were also vocal in their opposition to a draft law that would allow the government to restrict the right of movement and assembly, a measure officially to help fight the pandemic, but that could lead to abuse of power by government agencies. “We were quite critical and asked the government for more information,” says Nanuashvili. Despite this opposition, parliament approved the law.

Overall, according to Nanuashvili, the Georgian government has been fairly effective in managing the Covid-19 pandemic. With only 818 confirmed cases and 13 deaths, Georgia has fared much better than its neighbours, and the two-month lockdown was lifted on May 22. But things are changing in Georgia. “Since June 2019 Georgia has become a different country”, warns Nanuashvili.

Last summer saw the launch of a protest movement after the government fired rubber bullets in a crowd protesting the visit of a Russian MP in the Georgian parliament. Since then, the ruling Georgian Dream party has concentrated even more power in its hands, and now has a quasi-monopoly not only in the political field, but also in mainstream media, which will be crucial for securing a majority in this year’s parliamentary elections. As he puts it, in the current circumstances, “everything is possible.”

DRI: The fourth recommendation relating to the strengthening of the fight against corruption cannot be considered fully implemented at this stage
The Georgian Dream plan regarding the implementation of the fourth recommendation of the European Commission significantly missed the spirit and content of the recommendation of the European Commission.
DRI: The Court of Appeal issues ruling inciting hate-motivated violence
DRI is echoing the ruling made by Tbilisi Court of Appeal Judge Maia Tetrauli relating to the persons accused of the July 5, 2021 violence.
DRI: Attacks by violent groups are incited by the Government
In recent years, journalists, civil activists and opposition MPs have often become victims of verbal and/or physical attacks by offenders incited by the ruling party.